With all the Las Vegas economic gloom and doom prophecies running rampant, the city is hoping that the Year of the Ox Chinese New Year, which normally brings in millions of dollars annually to Nevada coffers, will be just what is needed again to boost business revenues and spirits.

The actual holiday starts on January 26 and runs through February 28.

But Chinese fortunetellers and seers have their doubts that the festive event will bring a much needed economic bump. The mystics say that fire is essential for financial well-being.  And it is nowhere to be found in the mythology of this Year of the Ox.  Rather, Chinese soothsayers see a deepening recession, with millions more losing their jobs, and stocks and home prices continuing to plunge.

Even newly elected President Barack Obama, born in a prior Year of the Ox, has mystics worried.  His bad omen is that he’s the 44th president- a number the Chinese deem extremely unlucky because “four” is pronounced the same as “death” in Chinese.

If positive economic karma doesn’t win out, it’s not because local businesses haven’t tried to lure in revenue.   Virtually everywhere in Las Vegas something is going on at some time, as was previously posted in the Las Vegas Backstage Access blog:  Top Five Picks for Chinese New Year Celebrations in Las Vegas

One of the best indicators of the rise of the Chinese New Year in Las Vegas is the revenue coming from baccarat play.   The amount dropped on baccarat during the Chinese New Year’s celebration has increased from $455.6 million in 1996 to more than $1 billion last year.

That was last year- before our global economic bubble burst.

With the disturbing trend of more and more Chinese high rollers – commonly referred to as “whales” – ending up dead, imprisoned or just broke because of corruption schemes gone bad and prosecuted, only time will tell if Asian wealth will pour into Las Vegas this year.   Or will it merely trickle?

Culminating at least a year of preparation, and followed by weeks of pre-pageant festivities in Las Vegas, on Saturday evening, January 24, Miss Indiana Katie Stam was crowned the 2009 Miss America at the pageant broadcast live from the Planet Hollywood Theatre for the Performing Arts.

Norm Clarke, entertainment columnist for the Las Vegas Review-Journal, reported that the number of free tickets given away to fill the 7,000-seat theatre for the event was in the thousands. But, even so, a jump in the TV ratings is anticipated when voting results are tallied.

Stam, a 22-year-old communications major from the University of Indianapolis, whose platform was promoting community service, called it “a dream come true.”

During the question-and-answer session that followed, Stam gushed to the media about what an exciting year it has been, with Barack Obama becoming the first African-American president, adding “and now I’m Miss America.”

The fresh-off-the-farm, church-going beauty tactfully thumped first-place winner Chastity Hardman, 24, of Georgia to take home the $50,000 scholarship and the right to represent the Miss America organization through 2009.

After walking the runway with her new crown and bouquet of roses, the new Miss America quickly pointed out that she loves breakfast food and can’t live without laughing.

Many Miss America contestants had eating on their minds and in their agenda, attending many eating fests while enjoying Las Vegas. 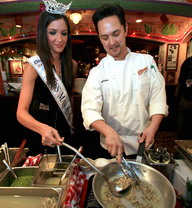 Days before the 2009 Miss America Live! Pageant, saucy Miss Massachusetts Alicia Zitka, 22, of West Springfield, quickly dispelled the stereotype pageant image of having to adhere to a strict diet.

Thankful she was wearing and evening dress and not shoe-horned into a swimsuit, the talented Miss America dance contestant was a quick study when she learned to prepare Italian food- and then ate with gusto her high-caloric creations.

Her January 17 pageant outing was to the Buca di Beppo restaurant in Las Vegas, Nevada.  Zitka was accompanied by 51 other ravished Miss America contestants.  “I’ve always wanted to learn how to cook fine Italian food,” said a beaming and hungry Zitka, a University of Massachusetts – Amerst student, as she received cooking tutelage from Buca di Beppo executive chef Michael Miyahara.

Providing a brief food profile to accompany her impressive pageant credentials, Zitka revealed, “My real favorite food is chicken noodle soup.  I’ll eat it anytime- when it’s snowing outside, and even on hot days.”  Then she added she wasn’t fond of eating fancy seafood, though.  Guys take note for your blackbook.