A library with dark, wood-paneled walls and a bookcase filled with leather-bound books sits adjacent to a regal living room at Caesars Palace’s Octavius Tower. You’d almost forget you were in Las Vegas if not for the tanning pool patrons outside the window. 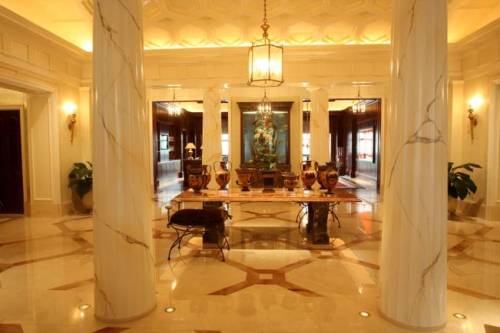 The antique-looking books in the library are seldom used, but they add to the villa’s residential illusion. So does the formal dining room that seats 12 and the media room with movie theater-style seating.

The centerpiece of each villa is the patio overlooking the pool area. The villas opened last fall, but the new Garden of the Gods pool just began to welcome summer visitors.

The three massive villas are the newest suites at Caesars Palace. With nearly 10,000 square feet of space, they’re some of the most opulent and largest suites on the Las Vegas Strip. The villas are on the second floor of Caesars’ unfinished Octavius Tower and are part of the resort’s long line of over-the-top suites.

From the private elevator to the 24-hour butler service, everything about the Octavius villas feels exclusive, including the price tag. The cost for a night is $40,000. The price isn’t recession-friendly, but their patrons aren’t exactly struggling in today’s economy.

The Octavius villas feel more like miniature mansions than hotel suites. Caesars spent about $15 million on each villa – a total of $45 million – to accomplish that goal. The villas are a collection of eclectic furnishings and faux artifacts, giving the feel of a collector’s well-kept home.

Wilson & Associates designed each suite with an individual identity — an opulent Grecian palace, an Old World Spanish home and a Parisian luxury apartment.

The design firm is responsible for other suites at Caesars, as well as the fantasy suites at the Palms and the rooms and lobby at The Venetian.

At 9,930 square feet, the Greek-style villa, which Caesars Palace dubs “Constantine,” is the largest of the three. The four-bedroom villa is far from subtle, but it’s subtly Greek with its fake marble columns and terracotta painted vases.

After stepping off the private elevator into the marble foyer of the Greek villa, guests will find a formal sitting room, a grand Steinway piano and working fireplace. On the other side of the hall are rooms with a pool table, a restaurant-sized bar and a theater.

Down a long hallway there are four bedrooms, each the size of a large hotel room, with walk-in closets and their own bathrooms. With custom marble and mosaics, no two bathrooms in the three villas have the same stonework.

Inside the Greek villa, the master suite’s bathroom is almost as large as the bedroom itself. The bathroom is covered in green and beige marble and features his and her toilets, sinks and vanities. It also has a steam shower, towel-warming racks and flat-screen TVs, among other amenities. A marble-topped tub with gold-plated fixtures is the centerpiece of the lavish master bath.

As trivial as they seem, the toilets are often the talk of the suites.  They’re controlled by remotes, function as bidets, have heated seats and the lid opens as guests approach. There’s never a reason to touch the toilet seat.

The villas are filled with quirks galore: mirrors that turn into TVs, pianos that play themselves and chairs that massage to the beat of an iPod’s song. A networked system allows the butler to control every device in the villa.

Though the three villas have different design schemes, they have similar amenities. The French villa is light and airy. The Spanish villa is designed with distressed wood throughout the main rooms.

Off each living room is the patio that overlooks the pools. Each patio includes a fire pit, dining table and a private Jacuzzi.

The view of Flamingo Road is less impressive. Those views are reserved for penthouses and other suites higher than the pool level. The resort’s two 10,000-square-foot penthouses in the Forum Tower are still the largest suites at the resort. Caesars Palace now has 11 villas, 11 penthouses and about 200 suites.