What does the very popular Austrialian vocal group Human Nature when they’re not performing at Imperial Palace in Las Vegas?  Gamble.   What else?  It’s Sin City! 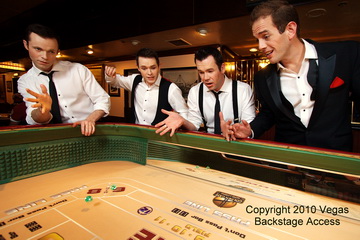 Human Nature, who formed as a doo-wop band in 1989 in Sydney, Austraila, has now been performing “The Ultimate Celebration of the Motown Sound” to rave reviews at the Imperial Palace in Las Vegas for the past nine months.

Tight harmonies and rich vocals are what make Human Nature standout in concert. Songs like “Reach Out”; “Just My Imagination”; “I Can’t Help Myself (Sugar Pie, Honey Bunch);” The Jackson Five’s “ABC,” and the group’s moving version of Robinson’s “Ooh Baby, Baby,” are their mainstays.

Motown music legend Smokey Robinson has acted as their official envoy and presenter of the LasVegas show and its touring production.   Now, it appears that Robinson has switched gears somewhat, gearing up for doing his own shows and promoting his own music including his new CD on his own label, “Time Flies When You’re Having Fun,” which is an album that embraces Robinson’s favorite theme: Love.

Entertainer Bette Midler on Sunday gave her final wave and curtain call – for now – for her show, “The Showgirl Must Go On,” ending her two-run at Caesars Palace in Las Vegas.

The Devine Miss M was honored during the finale from a variety of well-wisher cameos, including Marie Osmond, dissing Donny; Gladys Knight, Pip-singing “Memories,” and, via video, Celine Dion, who is reportedly returning to Caesars Palace soon.

But minutes before going on for her grand entrance, she arrived to ride the elevator up to the stage and a Cher impersonator, Steven Wayne, from Frank Marino’s “Divas Las Vegas” show at Imperial Palace showed up holding a sign aloft that read: “Get off My Stage, Bitch.” 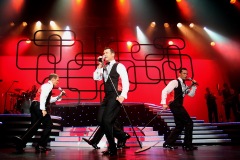