The creator of the “stripper-mobile” plans to bring it back to Las Vegas but officials say they’ll try to enact a permanent ban on the traveling nudie show.

Larry Beard, the creator of the innovative truck featuring strippers dancing in the back in a lighted Plexiglas box to advertise local strip clubs, said he wants to bring it back after their national “tour” to participate in Las Vegas’ April 30 Pride Parade.

The truck debuted in November 2009 with dancers from the Deja Vu and Little Darlings strip clubs, but when Clark County commissioners complained, Beard took it off the streets.

Since then, the truck has gone to New Orleans for the National Football Conference championship game, then to Miami for the Super Bowl. It also spent some time in Tampa Bay and St. Louis.

Clark County Commission members say they want to rewrite an existing law to keep the “stripper-mobile” off the Sin City streets for good.

Though Jesse James’ alleged mistress was just dropped from a recent Miami, Florida performance gig, and many other gigs as well because of public outrage over her planned appearances, Michelle “Bombshell” McGee has apparently found a much more “friendly” topless place to literally hang out– Las Vegas! 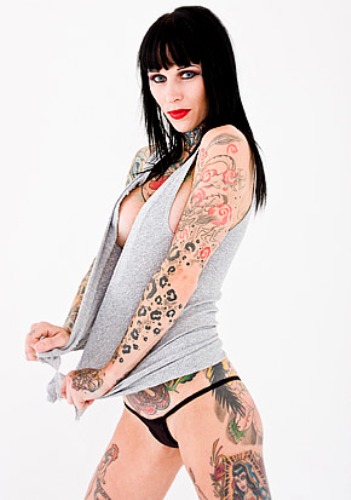 On April 23 at midnight, she is set to make her first Las Vegas appearance, signing autographs, posing for photos, and dancing topless at Déjà vu Showgirls club in Las Vegas.

According to the Déjà vu advertising and marketing director director Larry Beard, the club is taking advantage and riding on to her popularity right now. McGee will be paid $5,000 by the club, apart from the tips she will get.

There will also be a large group of tattoo enthusiasts attending.

Rolling Strippers Prove Too Much for Las Vegas

As previously reported by Las Vegas Backstage Access on Nov. 11, live strippers cavorting on the back of a truck have now proved too much — even for Sin City.

A Las Vegas strip club has agreed to stop an advertising promotion that involved hauling bikini-clad exotic dancers around in a truck down Las Vegas Boulevard with clear plastic sides.

“We’re going to respect the opinion of the folks that are against it,” Beard told The Associated Press. “We’re going to be good citizens and take it off the street.”

Beard had told the AP earlier this week that he was prepared to fight county leaders and others who thought the moving truck promotion was unseemly or unsafe.

“The girls are wearing more than the girls at the swimming pool wear,” Beard said this week. “Even though they’re not stripping and taking their clothes off I think people are offended because of the idea that they do.”

The truck rolled for 13 nights along the Las Vegas Strip from 10 p.m. until 2 a.m., trying to lure customers to the club. Three sides had windows that weren’t tinted, offering views of the strippers dancing around a stripper pole.

The tactic worked, with business booming almost twice what it was before the since the truck started going out, Beard said.

“We even have cars and limos follow us to the club,” Beard said.

The dancers were allowed to perform in the truck because it was classified as a vehicle for hire, which let the dancers ride in the back without seat belts, Beard said.

Public outrage over the truck grew as pictures and videos of the truck surfaced on the Internet and a county commissioner in Las Vegas vowed to shut it down.

Clark County Commissioner Steve Sisolak said he got calls from citizens who hated it and others who liked it, but he considered the truck a safety problem.

“It’s clearly a distraction,” Sisolak told the AP. “Somebody’s going to turn their head to look at some girl flipping upside-down and spinning on a pole, and take their eyes off the road and could swerve and pop up the sidewalk and plow into a bunch of tourists that are walking along.”

Sisolak said he plans to try to close a loophole in local laws regulating mobile billboards.  The next commission meeting is tomorrow in Las Vegas.

Regulations prohibit advertising vehicles that use animation or flashing lights, and Sisolak said he would try to prevent live entertainers from being used, too.

“Could they have won in court? That would have been a long, costly, time-exhaustive battle,” Sisolak said. “They clearly got a lot of publicity as it stands, which I’m sure made them happy.”

Even the men who hand out the alluring but tawdry “nude girls direct to your room” handbills stopped their hawking long enough to do some gawking at the “stripper-mobile” as it rolled down the Strip in Las Vegas.   Nearly everyone stopped to take notice.

The vehicle is akin to a small U-Haul truck but with Plexiglas surrounding the brightly lit cargo area instead of walls. In the middle is a gleaming stripper pole. Swinging around the pole is a scantily clad young woman. Two of her fellow strippers are in the back of the truck too, eagerly awaiting their turns.

It’s the ultimate new advertising vehicle that really draws in the business in Las Vegas, according to Larry Beard, marking director for Déjà Vu Showgirls. Having run the truck up and down the Strip late at night and into the wee hours for only the past 11 days, he claims it has doubled business at the all-nude Déjà Vu and Little Darlings gentlemen’s clubs.

If a couple of Clark County commissioners get their way, however, it might soon be a late, great idea. Arguing that state and county laws prohibit the use of a public right of way for advertising-only vehicles, as well as the possibility that the distracting nature of the “advertising” is such that it could cause accidents, commissioners plan to discuss it at this coming Tuesday’s board meeting.

“You could have 10 of them out there pretty quick and a million people just staring,” Commissioner Steve Sisolak said Tuesday. “We have to get a handle on it before it gets too out of hand.”

But inside the nearly soundproof rectangle that literally glows from a distance, Kay, 21, and Alyssa and Bella, both 20, were concerned about the pole slipping out of their hands. They balanced on clear-plastic high heels and laughed and posed. Their bikini tops and bottoms are skintight to try to prevent any wardrobe malfunctions during acrobatics on the pole.

Kay used a loudspeaker to urge onlookers to come see her sans clothing at Déjà Vu.

A young man in a passing SUV waved a fistful of dollars out his window. The double-takes spread like a wave through the pedestrians on the sidewalk.

“This is what Las Vegas is all about,” said Beard, marketing director for six business entities including Déjà Vu Showgirls, Little Darlings and Hustler Topless gentlemen’s clubs. “You come here to see something you can’t see anywhere else in the world.”

The reaction, and effectiveness of the advertising, “has been phenomenal,” said Fred Robertson, whose company, Rolling Ads, provides the truck. “Most people don’t pay attention to billboards. We go out and people are just waiting to see it.”

Beard said this is an alternative to paying huge tips to cabdrivers to bring in customers and all the legal hassle that is ensuing.

The adult strip clubs need this, they say. Business has been bad- really, really bad.

That argument probably won’t fly with some county commissioners, though.  Sisolak, for example, was spurred by a letter from a constituent, Ann Mueller, who told the Sun her grandson saw the stripper-mobile on Paradise Road around 5 p.m. Friday. (Beard said the truck usually only rolls from 10 p.m. to 2 a.m. but went early that night to accommodate a TV news crew.)

Mueller said in her letter: “This is not only disgusting but very dangerous” because it could cause a traffic accident.

But nothing about the women or the truck is illegal, a Metro Police spokesman said. “As long as it’s not impeding traffic, it’s fine,” Officer Jacinto Rivera explained.

“But just because no one has enforced it doesn’t mean it’s not the law,” she said. “I don’t care about the content or that they’re female dancers. I’m sick of the women, in fact — let’s get some men up there for once. But this is just illegal.”

“They won’t say it, but this is truly about content,” Letizia said. “It’s time someone in the community has the guts to say this is about class and decency in our community.”

If that argument is made, it is unlikely to withstand a court challenge, lawyer Allen Lichtenstein said. “It’s a First Amendment issue and commercial speech is protected speech,” he explained.

The stripper-mobile would not qualify as obscene, indecent or harmful to minors — “there’s nothing illegal about it,” he said.

Then again, maybe there doesn’t need to be. County sources say some of the powerful owners of Strip properties want the stripper-mobile stopped.