Las Vegas magician and illusionist and Luxor headliner Criss Angel has won the “Magician of the Century” award, which was presented to him after Angel’s second “Believe” show this Tuesday by Tony Hassini, founder of the International Magicians Society.

Hassini was at the center of a controversy last year when questions arose after his society reportedly honored three different female magicians as the top female magicians of the year for 2008, including former Las Vegas headliner “Scarlett — Princess of Magic.”

As previously reported by Las Vegas Backstage Access, the Monte Carlo magician has indeed called it quits after headlining and performing about 15,000 Las Vegas shows for the last 14 years.   Lance Burton will close his Monte Carlo run in Las Vegas on Sept. 4.

Burton reports that the decision to leave was his, though he remains guarded and vague when it comes to providing specific reasons for his departure.

“About three ago I had a moment of clarity when it just all became clear to me that I’m not on the same page as the hotel,” Burton said, adding, he doesn’t plan to badmouth the hotel where he spent at least a third of his career and has a deep emotional connection.

Some say that Burton and MGM Mirage officials were at odds over budgeting and cost-cutting issues, but, Burton says, that’s not the primary reason he gave notice.

Monte Carlo headliner magician Lance Burton will be mysteriously and suddenly packing his magical Las Vegas suitcases and announcing his departure this week.

Lance Burton is ending his current six-year contract at the Monte Carlo at the end of this summer — five years earlier than planned.

Burton had headlined at the Monte Carlo casino resort for 13 years before renewing the deal last year that would have taken him to 2015.

A 2011 trial date has been set in the lawsuit against magician David Copperfield, a frequent MGM Grand entertainer in Las Vegas, and throughout the world as well.

A federal judge has set a May 2011 trial date for a civil lawsuit filed by a model who claims she was raped by celebrity magician David Copperfield on his private Caribbean island in 2007.

U.S. District Judge John Coughenour lifted a stay that has held up the lawsuit pending the outcome of a two-year federal criminal investigation, which ended in January without charges being filed.

Coughenour also rejected a motion by the lawyers for Lacey Carroll, the 23-year-old 2010 Miss Washington runner-up, seeking a court order to prevent the FBI and U.S. Attorney’s Office from returning evidence gathered in the criminal case to Copperfield. They argued that the material was relevant to the lawsuit and worried that Copperfield, one of the wealthiest entertainers in the world, would remove the material to his island or destroy it.

The judge said there was no evidence that would happen, and pointed out that Carroll’s attorneys can still obtain the material through the normal discovery process. Coughenour said Copperfield knows that Carroll wants to review the evidence — some of it seized in FBI searches of his Las Vegas warehouse and MGM Grand Hotel theater in 2007 — and is obliged to preserve it.

Coughenour also noted that nothing is stopping Carroll from subpoenaing the evidence from the prosecutor, although that move could be challenged either by Copperfield or the U.S. Attorney’s Office.

The lawsuit was filed last July, just before the expiration of a two-year statute of limitations.

Carroll had claimed that she met Copperfield at a performance in the Tri-Cities area and that the 53-year-old entertainer invited her to his $50 million private island, where she claims he raped her.

The case took a twist when Carroll was charged in January with prostitution and lying to police. She is accused of trying to solicit a 31-year-old Bellevue businessman for $2,000 for sex, after going with him to a hotel room.

When he refused, according to a police investigation, Carroll told staff at the hotel that the man had assaulted her. Carroll and the man each called police.

She later refused to cooperate with the investigation, telling detectives she was worried that the Bellevue incident might affect her lawsuit and the Copperfield investigation.

Carroll has pleaded not guilty to those charges.

Magicians are a fraternal bunch, and The Amazing Johnathan got a big laugh at a December gathering to honor Lance Burton’s manager, Peter Reveen.

The dark-witted comic strolled out with stage blood on his face, and a made-up black eye: “I’m sorry, Scarlett — I swear I’ll never criticize your dove pull ever again.”

A big laugh erupted, for the tribute came only days after news that 21-year-old Rachel Jessee, left, known onstage as Scarlett — Princess of Magic, had been arrested for misdemeanor battery. She later pleaded no contest to assaulting her then 67-year-old manager and offstage partner, John Lewis. 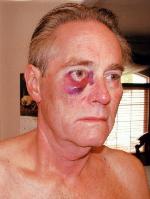 Lewis was sitting next to Jessee at the Reveen tribute, and he was perhaps the only person not laughing.

“It was like it was a big joke. I don’t find it a joke,” he said. “I was still suffering from a horrible black eye at that point. I let it roll off me, but my face (was) still sore. I wanted to put some makeup on my eye before I went to this, and Rachel said, ‘No, no, I want people to see how you look.’ ”

Lewis’ attempt to make a Las Vegas star of Scarlett is a cautionary tale of a show business dream that consumed, Lewis claims, nearly a million dollars of he and his wife’s retirement savings and personal effects.

It is also a sad story of domestic violence and — if Lewis had his choice in the legal system — elder abuse.

A week ago, Lewis and wife Carolyn filed a breach of contract lawsuit against Jessee, whom Lewis was dating, in Clark County District Court. The lawsuit claims repeated physical abuse and financial improprieties in converting Carolyn Lewis’ assets without her consent.

In an interview before the lawsuit was filed, Jessee denied any physical abuse beyond the November fight.

But she now contends Lewis pesters her new manager with e-mails and text messages alleging drug and alcohol abuse, which she calls “crazy.”

“I’m definitely not a drug addict,” Jessee says. “I did drink heavier than I should have when I was in the relationship because I was not comfortable, and it was kind of a way to cope. I wasn’t an alcoholic but I’d have a few drinks every night.”

Lewis says there were several escalating attacks. One time she pummeled his rib cage. Another time she hit him in the face and broke a tooth.

“It’s hard to believe that when you see her onstage, but she would just, like, turn into ‘The Exorcist,’ ” he says.”She’s got a terrible violent temper that just explodes. It’s hard to explain, because she looks small. But she’s extremely strong when she gets mad.”

Magician Steve Wyrick has been a solid mainstay in Las Vegas since 2007, performing in a $35 million showroom located in the Miracle Mile Shops at Planet Hollywood.  He has disappeared nightly; but, this time the vanishing magic act is apparently a indefinitely canceled show. The performer failed to appear for last night’s show and, apparently, the show is no more.

Wyrick shaped his reputation performing supposed dangerous stunts, but blew his magic cover when a July 4th vanishing act went awry after stage curtains around his “Death Drop” stunt burst into flames and a crew member was injured.

Speculation about his Las Vegas reappearance has not materialized, yet.

After breaking his right foot during a show in May [previous Las Vegas Backstage Access article], magician Lance Burton is staying on the Las Vegas Strip for another six years.

Burton and the Monte Carlo hotel-casino said yesterday that they have agreed to a new contract that will keep him as the resort’s headliner through 2015.

The 49-year-old illusionist says he plans to return to the stage on Tuesday, July 7.

Burton began his Las Vegas career 27 years ago with an eight-week trial engagement at “Folies Bergere,” which turned into a nine-year run.

Magician Rick Thomas and his band of white tigers will open at the Sahara on or about July 1.  Thomas has had a long

career on the Las Vegas Strip, performing at the Tropicana and Stardust before his show at The Orleans closed in June 2007.

Thomas will do a mix of afternoon and evening shows in the theater built in 2000 by fellow magician Steve Wyrick.

Monte Carlo headliner Lance Burton will miss 19 shows after breaking his foot during his May 7 show in Las Vegas.

Burton is undergoing surgery in Las Vegas on Monday on his right foot, according to his publicist, Wayne Bernath.

The accident occurred 15 minutes into the show as Burton was preparing to do the floating bird cage act with Elvis the bird.  When Elvis flew into the audience, Burton left the stage and retrieved the bird.  The injury occurred when the entertainer twisted his right foot on the way up the steps.  Burton finished the show despite considerable pain.

Penn & Teller, Harrah’s Entertainment Give Back to Las Vegas

Comedy-magic duo Penn & Teller will present Goodwill of Southern Nevada with hundreds of men’s and women’s business suits that were collected throughout the Harrah’s Entertainment properties. The event starts at 11 a.m.  April 15 at the Penn & Teller box office in the Rio All-Suite Hotel and Casino in Las Vegas.

The event’s purpose is to raise awareness of Harrah’s Entertainment’s ‘Giving Back to the Community’ resource fair that focuses on professional and personal development on Thursday, April 16 from 10 a.m. to 4 p.m.  at the Rio Pavillion Ballroom in the Rio Convention Center at the Rio All-Suite Hotel and Casino.

Both events are free and open to the public.

For a change, good news showers down on Las Vegas illusionist Criss Angel.  The International Magicians Society has awarded the 41-year-old Angel, whose real name is Christopher Sarantakos, its first-ever Merlin Award for “Magician of the Decade” last Saturday in honor of his magical accomplishments. Angel previously received the organization’s “Magician of the Year” honor in 2001, 204, 2005, 2007 and 2008.

The famed illusionist appeared humble when accepting the award, telling those attending, “I never set out to win awards, just to push my own envelope and try to create something that’s never been done.”

Criss Angel’s “Believe” illusion show opened at the Luxor in Las Vegas early in January to mixed reviews and almost immediately went dark for a Cirque du Soleil “magical” revamping before reopening later in the month.

To add to Angel’s mishaps, in late February, Angel broke up with his girlfriend, Holly Madison, who previously had been dating Playboy mogul Hugh Hefner until last October.