Recession?  Las Vegas, apparently, is in the money when it comes to anything related to the M-O-B!

Yep, we didn’t want to let this one get swept under the rug or becoming the cause for another concrete casting. (Sorry, a bad mob-ism.)

The Nevada Commission for Cultural Affairs in mid-March awarded a $220,000 grant to the new Mob Museum planned for Las Vegas. 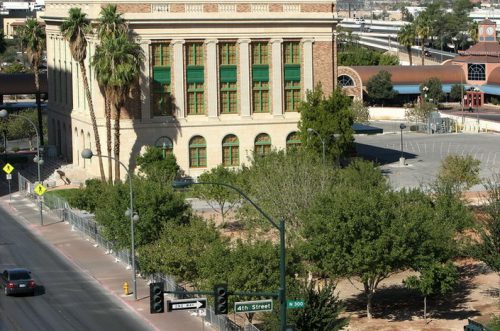 The commission allocated $3 million to 23 projects that week, with the Las Vegas Museum of Organized Crime and Law Enforcement by far getting the biggest single award.

State Historic Preservation Officer Ron James says there is an additional $97,000 in reserve that was allocated to the project.

The museum is set to open 2011. It has already received – are you sitting down? -$3 million from Nevada over the years.

We guess it doesn’t hurt the project if the current Las Vegas Mayor, Oscar Goodman, is a strong proponent and also a prior mob lawyer.

Don’t fret about the sifting off of your hard-earned money for a mob edifice:  Officials from the Mob Museum have reportedly told the commission this is the last time they’ll ask for money from the state.  Yeah, right.

Crime and punishment always gets center stage in Las Vegas.  On the heels of continuing high-profile criminal trials and Las Vegas announcing plans to finally construct a Mob museum (as previously reported by Las Vegas Backstage Access on Jan. 16, March 17, June 20 and Aug. 5), now you have an option of either taking a cab, limousine or, if real daring-do is in your blood, get whisked around Las Vegas in an authentic prison bus.

It’s a 1950s style prison bus with bars on the windows, ready to take you to the nightclubs, bars, brothels, or whatever flights of fancy you desire. The company Las Vegas Con Xpress offers rides in these old and very kitschy prison buses, authentic right down to the graffiti.

“Prisoners” or passengers are loaded up in the back behind a locked gate. You even get to pick your own “Sheriff”, also known as your tour guide.  Once loaded up and locked down, the prison bus heads to all the hottest spots in town.

Con Xpress founder Danny Sinatra thought it criminal to pass up on his unique venture.  “Never in the U.S. have prison buses been put back into public use for charter services,” Sinatra says.

There’s no question the buses are attracting attention. Since operations began about a month ago the buses have been involved in lots of drama, being pulled over by local police, Nevada State Police and, yes, even Homeland Security.

Tourists swarm the bus, getting a fun kick out of this odd blast from the past.  “For a bachelorette or bachelor party it would be fun”, said Ray Navarro, visiting Las Vegas from Arizona.

Sinatra says he’s fully licensed to operate his charter business and he is working with local law enforcement as well as security at casinos to let them know his buses are out on the streets.

It has been long anticipated for years, fighting one financial hurdle after another, but finally the groundbreaking for the long awaited mob museum took place yesterday.  Keeping true with the mob theme, the doors to the museum were actually busted in. Armed with a baseball bat, Las Vegas Mayor Goodman took a hefty swing and officially knocked in the doors to the museum.

The colorful and jubilant ex-mob lawyer promises the museum will provide a unique and entertaining experience when visitors step through the doors. The museum will allow visitors to travel back in time and take part of what it was like to live in the era of the mob and even be part of the law enforcement that brought the mob down.

Mob memorabilia for the exhibits has been pouring from all over the U.S., much like oozing cement for stylish “cement shoes.”

“This is a great day for the city of Las Vegas, celebrating the start of construction on our next great attraction, the Museum of Organized Crime and Law Enforcement, which will be commonly known as the mob museum,” Goodman said.

One anticipated attraction to the museum will be the actual wall that was part of the St. Valentines Day Massacre back in 1929.

Mayor Goodman says he has been getting plenty of calls from people all over the country who are interested in coming to museum once it’s open. Goodman says once open, they expect to earn $600,000 to $800,000 a year.

Construction on the building will start now and then will move to the actual museum. In all, they anticipate having the museum open and ready by 2011.

Las Vegas tourism and business development efforts were dealt more crushing blows this week.  The $11.5 million proposed Mob Museum (on the current old post office site, right) — aka the Las Vegas Museum of Organized Crime and Law Enforcement, which was supposed to chronicle the influence of organized crime on Southern Nevada and the law enforcement effort to drag criminals into courts of law — became the focal point in a contractor bidding dispute Wednesday on one of the final phases of the planned construction project.

The matter could head to litigation, tying up the museum’s originally planned 2010 opening for years.

Las Vegas is in protracted litigation with one of the contractors over a separate project. Furthermore, Las Vegas City Council members criticized city staff for inadequate bid specifications, worrying that disputes like this one will increase because of intensifying competition for construction work.

The contract was scheduled to be awarded Wednesday to APCO Construction. After a lengthy hearing on a protest filed by Flagship Construction Co., a competing bidder, the matter was rescheduled for July 1, but some expect the fight to continue beyond that date.

At issue is the full disclosure of contractor litigations, specification on removing hazardous materials, a seismic retrofit, interior remodeling and the historic restoration process.

Las Vegas Mayor Pro Tem Gary Reese was even more pessimistic: “We’re going to have a project here in the city of Las Vegas that’s going to be detained for a couple of years.”

The news was a real downer for prior mob lawyer and current Las Vegas Mayor Oscar Goodman, a top-tier pet downtown development project of his.  On top of that, the always outspoken mayor had to remain silent, recusing himself from the discussions because he shares an interest with one of contractors, APCO in the Apex Industrial Park.

“I’ve been the driving force, I guess. I hope it’s complete while I can still enjoy it in public office,” says Goodman, who is considering a bid for Nevada governor as an independent in 2010.

However, work continues on the Mob Museum exhibits that are planning to be located inside the retrofitted 1930s-era former courthouse on Stewart Avenue downtown, across the street from City Hall.

The museum is being funded by a mixture of private donations and grants, with the bulk of the money to come from city Redevelopment Agency bonds used to boost downtown Las Vegas development.

Wednesday’s bad business development news was a prelude to more bad Las Vegas news on Thursday. To add salt to the oozing wounds, the controversial new city hall project, the touted savior catalyst that could jump-start the next wave of Las Vegas development, is also stalled and in jeopardy, according to Goodman in his Thursday news conference.

Goodman blamed skittish financial markets, saying the city originally planned on an interest rate of around 5 percent. As of Wednesday, it appeared the best the city could do was 7.5 percent. “That’s a difference of millions of dollars,” Goodman said.

The next step for the city hall project would appear to be to seek bond financing for what is known as a “lease-purchase” agreement in which investors put up the construction money and are paid back through annual appropriations by the city. Such financing is considered a much riskier method than general obligation bonds because it’s not tied to a specific funding source.

The Las Vegas proposed mob museum – a pet project of Las Vegas Mayor Oscar Goodman – has very few friends in Washington, but some legislators in Nevada’s Carson City capital apparently like the idea.

The project is on tap to receive a $300,000 grant from Nevada’s Cultural Affairs Commission, the biggest endowment ever bestowed by the agency.  Yes, the museum had originally asked for a $900,000 grant, but probably had misgivings about such a large request and later pared down their request down to $500,000.

The commission has given out 28 grants including $200,000 for the Neon Museum, $120,000 to help restore the 1850s Kiel Ranch, and $108,000 for the Las Vegas Water District to buy four railroad cottages built near the turn of the century and move them to Springs Preserve in Las Vegas.

Mobsters Are THE Las Vegas Art?

Some mobsters are peacefully decomposing in corn fields; others are unwillingly lending their frames to help

support the Hoover Dam.   But for Las Vegas Mayor Oscar Goodman, an ex-mob lawyer, those resting places are merely a mobster purgatory.   If the mayor has his way – and he usually does get his way – the City of Las Vegas will reincarnate the good ol’ trigger-finger-boys for their last stand- right into the annals of true Las Vegas history- or should I say folklore?

Mayor Goodman, in his last term of office, is definitely not a lame – or whacked – duck, rather he is fighting like a possessed madman on an energy drink I.V. to establish the Las Vegas Museum of Organized Crime and Law Enforcement (translated: Las Vegas Mob Museum).

And it doesn’t matter one iota to headstrong Goodman when Senate Minority Leader Mitch McConnell, a Kentucky Republican, and others, like Newt Gingrich, recently said his idea is a shining example of a pork barrel project gone very bad- and one that should definitely not be part of Obama’s economic stimulus package.

Goodman steadfastly believes that Las Vegas and a mob museum marriage is a natural fit.

Perhaps, yes.  Perhaps, no.  But, regardless, it will be a tough upward climb to sell the idea in a sour economy if the $50 million mob museum project opens in 2010, as planned.   Since 2001 the project has only coughed up $3.6 million- and that was composed only of federal grants, and from matching state and local money.

If you don’t believe there are enough “silent” mobsters still kicking around in Las Vegas that are rich enough to build their own museum, just wait until you see who digs deep in their pockets when the museum fundraisers kick off  later this year.

Las Vegas Mayor Oscar Goodman was positive and upbeat when delivering his State of the City address on January 13, saying, “We’re not going to abandon our vision of being a great city,” talking to 350 people listening to his address at the Fifth Street School.  Continued investments in downtown Las Vegas projects, he said, were necessary to sustain the economy in the short and long-term.

And several projects were specifically singled out as requiring continued support:  Union Park, Smith Center for the Performing Arts (soon to break ground), the nearly completed Lou Ruvo Brain Institute, and the start of construction for a World Jewelry Center, a Charley Palmer restaurant/hotel, and a new city hall building.

Curiously, the mayor mentioned nothing in his address on his favorite high-profile project: the Las Vegas Museum of Organized Crime and Law Enforcement, commonly referred to as the “Mob Museum.”   The project has been mocked and scorned nationally since it was reported that Goodman put it on his “wish list” to receive funding from the pending federal stimulus package.