Fifteen hundred Scientologists and their guests from across Nevada and the Western United States gathered last Saturday for the grand opening of the new Church of Scientology of Las Vegas. The 40,000-square-foot Church, located at 2761 Emerson Avenue, will serve parishioners from throughout Nevada and represents significant growth for the congregation formed in Las Vegas 40 years ago.

Mr. David Miscavige, Chairman of the Board of Religious Technology Center and ecclesiastical leader of the Scientology religion, presided at the evening dedication ceremony, welcoming the assembled Scientologists and guests to their new Church.

In welcoming the parishioners and guests, Mr. Miscavige said, “You don’t get much closer to the spirit of what we represent than a city that rests on the dreams of artists and treats everybody as somebody. So, yes, we have opened new Churches in cultural epicenters before. But talk about ‘Center Stage Planet Earth.’ This one stands in a town so bright you can even see it glowing from deep space. And now it’s home to our newest Church of Scientology and Celebrity Centre Las Vegas.”

Talking about the new Church, Mr. Miscavige said that Celebrity Centres are those special Churches of Scientology designed to enhance a culture by enhancing the artist.

“The first of this new breed was opened only just last year in Nashville-otherwise known as Music City, USA,” he said. “But as your honorable Mayor pointed out, what plays in this city now plays in every other cultural capital on earth.

“And even more than that-and with all due respect to your Mayor’s modesty-it’s not a London, a Paris, a Tokyo, Milan or New York that tops the resume of international performers these days. No, it’s the fact one can say: ‘I do Las Vegas, which is Show Town planet Earth.’

Set on five acres of desert landscape, the former synagogue and school has undergone extensive renovation to accommodate all Scientology religious services and also serve as a home for the community services the Church provides through the many activities and humanitarian programs of its members.

An expansive Public Information Center houses a permanent multimedia exhibit describing the Church’s beliefs and practices and the life and legacy of Scientology Founder L. Ron Hubbard. Displays also cover the Church-sponsored humanitarian and social betterment programs that offer practical answers to the societal ills of crime, drug abuse, illiteracy, declining moral values and natural and man-made disasters. These programs represent the work of the Church of Scientology in servicing every community in which they reside as well as other communities around the world.

There is also a Chapel for Sunday services, weddings, naming ceremonies and other congregational gatherings including workshops and seminars for artists; spiritual counseling rooms; course rooms for religious study; seminar rooms; a bookstore containing the written and spoken materials of L. Ron Hubbard; and Community Relations offices and meeting rooms to coordinate social betterment programs with like-minded organizations in the community. There are spacious lounges and a central courtyard to serve as a gathering place for artists and community visitors, in keeping with the unique purpose of a Scientology Celebrity Centre to help the artist and thereby benefit the culture as a whole.

In closing the dedication ceremony, Mr. Miscavige spoke of the significance for Las Vegas of the new Church: “Yours is a city that rose out of sand to become an artistic empire and inspire the world. As such, it really is a place of dreams-and extravagant dreams at that. So as we, too, know what it means to build upon a dream, let this new Church of Scientology signify the fact we believe in your artists, we respect the audacity of your vision-and together, we can light up this city so brightly, it will shine unto eternity.”

This weekend Las Vegas will celebrate the Day of the Dead, or El Día de los Muertos, the Mexican celebration of the dead.

The 9-year-old festival at the Winchester Cultural Center is the largest Day of the Dead celebration in Las Vegas, a city which enjoys celebrating all things dead.

This year 21 altars, some as large as 16 square feet, will welcome home the souls of loved ones who return to eat their favorite foods and be among living friends and family during the holiday.

Irma Wynants began the Las Vegas festival in 2001 at Prince of Peace Catholic Church with only eight ofrendas (altars) and a few performers.

Offerings are left on altars decorated with flowers, candles and incense. The dead are publicly remembered and shared. Mexican music and dance are celebrated, along with satirical poems (cavaleras) that are read aloud from stage.

There will even be workshop on how to make sugar skulls- but the elaborate, candlelit ofrendas are the main attraction. Made mostly by Mexican immigrants, they represent traditions held in the cities and states from which they came — Hidalgo (where they build little houses as altars), Mexico City, Michoacan and even Chihuahua, where families typically bring food and friendship to cemeteries on the holiday rather than build altars.

This year the ofrendas will reach out to immigrants who died attempting to cross the border. Another will reach out to people who have drowned in Lake Mead. And the Southern Nevada Agency Partnership is building an ofrenda dedicated to people who commit suicide on public land in the Mojave area. Another group plans to create a Michael Jackson ofrenda. 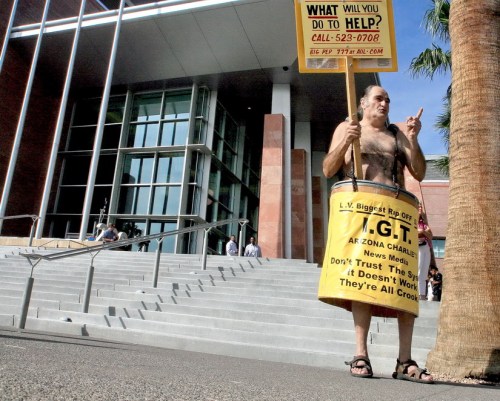 Business as usual doesn’t cut it in today’s sour economy.  Getting the support of a higher power hopes to be the winning ticket for John 3:16 Cook.  This week he threw his colorful hat into the ring to run for mayor of North Las Vegas.

Cook, 76, is a fervent, active Las Vegas street preacher and longtime advocate for the homeless.  After once running a homeless shelter and after several failed prior bids for Las Vegas political offices.  But his marriage of 21 years is still growing strong with Magickal Marissa- a witch, metaphysict and astrologer.

Vowing an unconvential campaign,  while courageously fighting cancer, Cook’s candidate fact sheet  under the “other information” category, he wrote:  “I will marry, bury, and baptize all!”

John 3:16 Cook joins a handful of other people in the race to replace term-limited North Las Vegas Mayor Michael Montandon in this year’s municipal elections.