Floyd Mayweather Jr. , on left, is undefeated, a six-time world champion and perhaps the biggest draw in boxing.

Shane Mosley is a great champion who’s past his prime and probably couldn’t carry a pay-per-view card by himself.

However, it’s Mayweather who has the most to prove from Saturday night’s welterweight bout in Las Vegas (HBO Pay-Per-View). He’s arguably the most-skilled boxer in the world.

Instead of that distinction drawing him praise, Mayweather is reviled for his defense-first style, as well as his big mouth.

He prides himself on being the greatest ever (in large part to his 40-0 record) and at the same time he’s in a slugfest to be considered the best boxer today.

Manny Pacquiao ostensibly holds that crown as much for his recent accomplishments as his penchant to be a warrior in the ring. Courage is what separates Mayweather and Pacquiao in many people’s perceptions — with Pacquiao being a gusty fighter while Mayweather hits and runs.

Only time will tell who will emerge victorious.

Shane Mosley to Fight Floyd Mayweather Jr. on May 1 in Las Vegas

Shane Mosley and Floyd Mayweather Jr. have finally agreed to square off for a welterweight super fight on HBO Pay-Per-View at the MGM Grand in Las Vegas on May 1.

The hubbub for the anticipated fight started after Mayweather came out of his 18-month retirement last September.

Mayweather became available to fight three weeks ago when negotiations for a Manny Pacquiao ticket stalled.

All parties agreed to conditions for a March 13 bout when Mayweather wanted to have a random blood testing done in addition to the agreed random urine testing.

The last time Mosley fought was against Antonio Margarito last January, winning his title in a ninth-round knockout.

The chief executive of Golden Boy Promotions said  he has “finalized” a deal to match Pomona’s Shane Mosley, right, (46-5, 39 KOs) versus Andre Berto (26-0, 19 KOs) in a world welterweight title unification bout on Jan. 30 at Mandalay Bay in Las Vegas.

Mosley, who aspires to fight Floyd Mayweather Jr. and/or Manny Pacquiao, had a TKO victory over Antonio Margarito earlier this year. 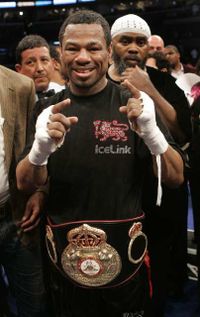